Babybird: the English Eels, sort of 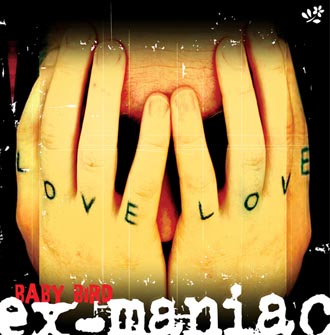 It’s not hard to find common ground between Babybird and Eels. Both are ostensibly bands, but in reality they’re solo efforts that may or may not involve other musicians. They both tend to use the same recurring musical motifs (or, if you’re not a fan, both keep releasing the same bloody song). They both tend to depth-charge their chances of commercial success (one of Eels’ most beautiful songs is called It’s a Motherfucker, while Babybird’s comeback single starts with the line “I will kill you, said the five year old” and moves on to talk about feral kids and kiddie-fiddling). And if they’re known in the outside world at all, they’re known for the One Big Hit – Novocaine for the Soul in Eels’ case, and You’re Gorgeous in Babybird’s case.

Where they differ is in personality. Despite the horrific things E from Eels sometimes sings about, there’s always an aw-shucks, self-deprecating humour behind it all. There’s humour in Babybird too, but it’s much darker, much bleaker. Eels’ humour is survivor’s humour, gallows humour. Babybird’s is a maniacal cackle, the sort of noise the mad scientist makes before pressing the big red button that unleashes the killer monkeys. Or something.

Actually, they differ in another way too: quality control. I love Babybird, but of the 4 billion albums he’s recorded and released I reckon there are four really amazing albums in there.

I’m thinking about all of this because Babybird’s got a new album out, Ex-Maniac. If you don’t like Babybird you’ll bloody hate it, but if you ever liked the band there’s a lot to like here.Â Unless, that is, you’re a fan of You’re Gorgeous – a fan in the “it was our wedding song” sense, because it does seem that a lot of people bought it for the title alone and didn’t listen to the rather horrible words. Ex-Maniac’s happiest title is “Bastard”.

Ex-Maniac is very Babybird, both in good ways and in bad ways. The bad: it’s patchy, and when it’s bad it’s self-indulgent and pretty tuneless. The good: there’s some great stuff here. Like Them nails the paranoia and anger of (some people’s experience of) fatherhood, while the Failed Suicide Club is heartbreaking in the same way so many Eels songs are heartbreaking. Drug Time is both funny and sad, and Unloveable – with long-time fan Johnny Depp playing guitar – is almost funky. Apparently Depp largely paid for it too, although while Ex-Maniac was recorded in LA – the same place Eels hail from – the sunshine clearly hasn’t cheered Babybird’s Stephen Jones up at all.

Here’s a link to a live version (or at least, live pictures stuck on the studio audio) of the cheery single Like Them. I’m going to the Glasgow gig on March 18th. Do say hello if you’re there too. I’ll be the overweight bloke blubbing to If You’ll Be Mine. Or more likely, one of the overweight blokes blubbing etc etc etc.