iPad: it doesn’t have hooves because it isn’t a horse 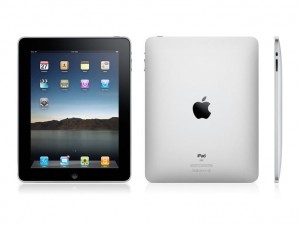 I wasn’t entirely convinced by the iPad until Steve Jobs announced the price: at $499, it’s a pretty amazing bit of kit. That’s netbook money, and that means it could be a pretty big deal. I’m quite excited about it, because I can think of three people who’d like it a lot: me, Mrs Bigmouth and my mum.

Me and Mrs Bigmouth first. I’ve already got a computer for work, so I’m not greatly bothered by the iPad form factor. What I do need, though, is a replacement for the old Windows laptop I keep downstairs. It’s used for web browsing, Twitter, the odd bit of Facebook, the odd bit of video and the odd bit of typing. The iPad with a dock can do all of that, and it can also do iPlayer (or at least, I can’t think of any reason why it can’t – iPlayer works on iPhone using streaming H.264 video).

Don’t underestimate the power of iPlayer, by the way. It brings Shaun The Sheep to angry toddlers.

I also have a Â£702/year newspaper habit. Imagine if I could come downstairs in the morning, grab the iPad, and use it as a newspaper. It’s big enough so there’s still the serendipity of seeing articles you might otherwise miss, and it’s digital enough that I can get my news for free (or nearly free, depending on what the Guardian, Sunday Times etc do about online content). When I’m done it becomes a photo frame until Mrs Bigmouth fancies a bit of Facebooking, emailing or newspaper reading.

So: it replaces the laptop, it saves me money. It’s an easy sell. It doesn’t have e-ink, but I wouldn’t be using it long enough for that to be an issue.

Then there’s my mum. She doesn’t really need a computer, but she has one. She uses it for email, for viewing Flickr, and for booking flights. If the iPad can print wirelessly – and I hope it can, because it renders iWork pretty useless if you have to sync with a desktop just to print a letter – then again, replacing her laptop with an iPad is an easy sell.

I’ve written a few other things over at Techradar. First, why I think the iPad is more revolutionary than it appears, and why some of the criticisms so far don’t make sense:

Then, whether the iPad is a Kindle killer and a netbook nuker.

The problem is that netbooks are essentially cheap laptops, which is both their strength and their weakness: the price is right but they’re slow, they’ve got small screens and they’re still PCs – with all the complexity, malware and hassle that entails. The iPad, on the other hand, has a much bigger screen, is much simpler, is a proper media device, gets ten hours out of a battery and doubles as an eBook. We wouldn’t want to type on it all day, but then we wouldn’t want to type on the average netbook all day either. We’ve got proper computers for that.