I went to see U2 last night. They weren’t very good. Part of it was the sound – maybe it’s just me, but when I go to see a four-piece guitar band I quite like to hear the guitar and bass guitar – and part of it was that they seemed a bit lacklustre. Most of it, though, was me.

I used to love U2. The Edinburgh leg of the Joshua Tree tour was my first big gig – a hugely happy memory – and the 1992 Zoo TV tour remains one of the most incredible gigs I’ve ever seen. I used to buy the music press to find out what Bono had to say, for crying out loud. And then I stopped loving them and started to detest them. 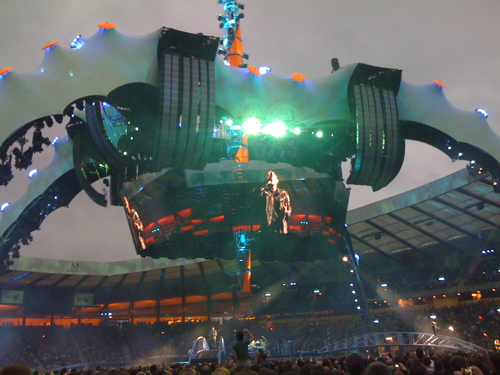 I stopped loving U2 in 1997 when they were touring the Pop album. It wasn’t a great album, which is something even U2 admit now, and with hindsight going to see three consecutive gigs – two in Dublin and then one in Edinburgh – wasn’t very clever. The first night was okay, but it was no Zoo TV; the second night was rotten, because Princess Diana died and the band paid tribute mid-gig. That was a bit too Elton John for my liking, and when they did it again in Edinburgh – at least, I think they did; Murrayfield’s legendary acoustics meant they could have been paying tribute to Hitler for all I could hear – that was the end of my U2 fandom.

Naturally, I decided to hate them instead. For a good few years they provided plenty of reasons to, as Bono got more and more annoying and the records got patchier and patchier. Old B-sides dug up and performed with Boyzone? The band who came up with The Unforgettable Fire churning out dross such as Elevation? Pffft.

There’s a – sadly untrue – story about U2 that cracked and still cracks me up: the band are playing Glasgow, and after one of the anthems Bono stands stock still, clicking his fingers. He does this for a while, saying nothing. Click. Click. Click. “Every time I click my fingers,” Bono says in his most pompous voice, “Somebody in Africa dies.” There’s a pause, and then one of the punters yells out: “Well, stop fucking doing it, then!”

The thing is, though, I still secretly wanted to love U2. I was like a teenage boy slagging off an ex-girlfriend while secretly hoping she dumps her boyfriend and comes running back. And from time to time, there were flashes of the U2 I used to love so much. Beautiful Day is wrapped in joy for me – it was the soundtrack to an extraordinary trip with the lady who is now Mrs Bigmouth – and the first time I heard Sometimes You Can’t Make It On Your Own, in circumstances I’d rather not share, I burst into tears. There was the odd flash at last night’s gig too. Stuck In A Moment… was the U2 of old, a staggeringly beautiful few minutes of music. But there weren’t many bits like that.

And that’s because U2 aren’t the same band I fell in love with. They’re not the hungry band who toured the Joshua Tree, or the panicky reinventors of Zoo TV; they’re four middle-aged millionaires whose fans turn up to hear the songs they wrote 20 years ago, babysitter permitting. Creatively, they’re moving/have already moved into Rolling Stones territory: you go to the gig for the spectacle and cross your fingers that they don’t play too much of the new, rubbish stuff. 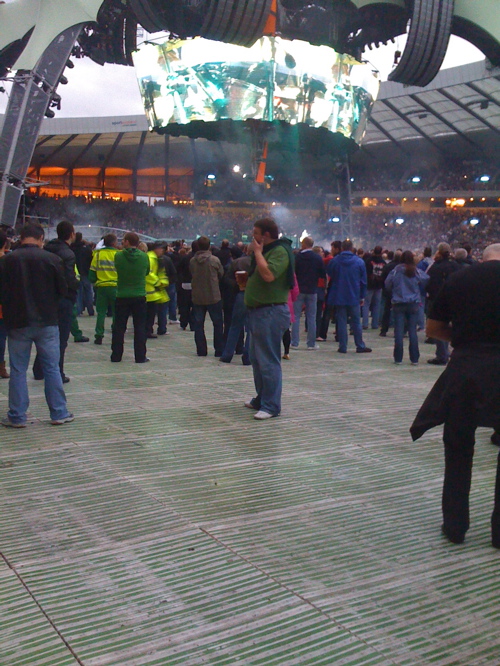 And I’m not the person who fell in love with U2 either. You’re more likely to find me teaching Baby Bigmouth the “ma ma ma” bits of Lady Gaga’s Poker Face than poring over sleeve notes to work out what it all means, man. Musically, I’m moving into Dad territory: with the odd exception, the bands I’ll be listening to – and annoying Baby Bigmouth with – in a decade are the bands I was listening to a decade ago.

For me, then, going to see U2 again and hoping to be blown away was like meeting up with a girlfriend twenty years later. In your head, she’s young and beautiful. In her head, you’re slim and sexy. In the flesh, she’s got an arse the size of Belgium and crow’s feet deeper than the Grand Canyon, while male pattern baldness and alcohol abuse mean you look like a sick potato. And when you talk, you soon discover that the only thing you have in common is that you both own your own legs.

The defining moment of the gig for me wasn’t musical: it was when the screens showed baby-faced drummer Larry Mullen Jr, rock’s very own Dorian Gray. And he looked old. Of course he did: he is, and I’m not far behind him. In the end it wasn’t really a gig: it was a reminder that I’m not young any more, sponsored by BlackBerry.