I’ve been reading Q Magazine for as long as I can remember, but last year I finally stopped buying it. That was partly because I’d reached the age where I had absolutely no idea who any of the bands in it actually were, but it was mainly because Q became crap. Lists of songs are funny when you’re doing a collaborative playlist on Spotify; they’re dull as ditchwater to read.

But now – as Smash Hits might have put it – it’s back! Back! Baaaaaack! 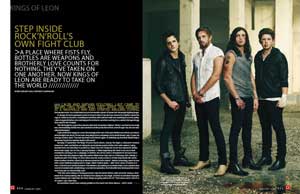 Credit where credit’s due: rather than head further into Heat territory, editor Paul Rees (formerly of Kerrang, I think) has taken the magazine in the opposite direction. I’d hate to see the freelance bill, but Rees seems to have looked up the Big Book of Good Music Writers, hired them, and given them enough space to do something interesting. The result is a magazine that’s as good as, if not better than, it was in its heyday.

If you’re a lapsed Q reader, it’s worth picking up again. The current issue even manages to get an interesting feature from a Take That interview. Really.