Fighting piracy by shooting yourself in the foot, #3124 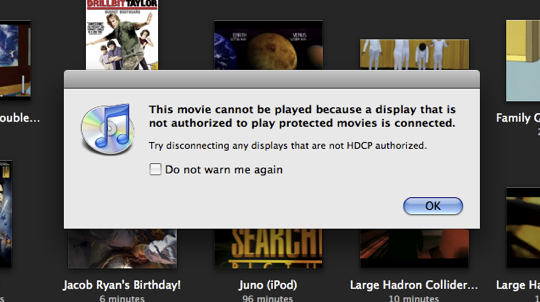 High Definition Content Protection (HDCP)â€”you can’t live with it, but you practically can’t buy an HD-capable device anymore without it. While HDCP is typically used in devices like Blu-ray players, HDTVs, HDMI-enabled notebooks, and even the Apple TV in order to keep DRMed content encrypted between points A and B, it appears that Apple’s new aluminum MacBook (and presumably the MacBook Pro) are using it to protect iTunes Store media as well.

the problem comes in when you realize that the new unibody machines don’t offer a VGA / VGA-to-component output, meaning that you have to connect it to an HDCP-compliant display if you want to see anything. We know, one word in particular keeps coming to mind to describe this fiasco: awesome.

As one Engadget commenter puts it:

Seriously, if you pirate it, it JUST WORKS. No need to spend extra to comply with DRM/HDCP crap.