(This is a review of a product I bought with my own cash money, and still use – Gary)

I’ve been talking about this in the comments of another post but I figured it’d be a good idea to post a quick review (not least ’cause it makes the information easier to find if you’re Googling). 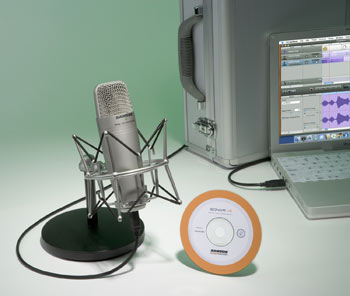 So, you’ve got a computer and you want to make music or do some podcasting. Internal mics aren’t up to the job (particularly on laptops – they just pick up hard disk thrashing and fan whirr), headset mics are okay for Skype but a dead loss for music, and proper studio mics cost a packet and need an external power source. Enter Samson, whose Podcast Pak is aimed – yes! – at podcasters. I reckon it’s pretty good for home music makers too.

Dull details first: some shops will charge you Â£129 for this pack, but if you shop around you can get it for Â£84 (via an Amazon partner in my case, but other music shops have similar deals). I did a quick Google and the going rate in the US seems to be about $160, but I’m not up to date with US bargain hunting so you may well find it cheaper. If you don’t want the goodies but do want the mic, the going rate is around Â£50.

What you get: the Pak comes in a lockable, well padded aluminium case with cut-outs for the various bits and bobs. Inside there’s Samson’s C01U condenser microphone, a 10-foot shielded USB cable, a desktop mic stand, a spider shock mount and a mic stand clip with an unscrewable European mic stand adaptor (the Samson stand is a US fitting). You also get a copy of the basic but OK Cakewalk Sonar LE software (PC only), although if you’re on a Mac you’ll use Garageband anyway.

What you don’t get: Samson’s SoftPre software, which provides a low frequency cut, preamp gain and phase switching. It’s well worth having and you can get it for nowt from the Samson website.

So is it any cop? Garageband recognised it immediately, and while I thought there was a bit of delay while monitoring the input it turned out to be Garageband running out of puff. Muting a few tracks and changing Garageband’s buffer size reduced but didn’t eliminate the problem, so if you’re doing vocals and monitoring them at the same time there is a slight but noticeable delay. As the Samson’s a USB mic there’s no way round this – you can’t hook it up to something else for real-time monitoring. If you’re singing, the best bet is probably to strip Garageband right down to minimise this delay or just switch off mic monitoring altogether.

If you’ve used a condenser mic before you’ll know what to expect. For vocals or speech, close-miking gives a wonderfully warm and deep sound, which in my case made me feel like Barry White. Like all such mics the sound changes according to where you put the microphone, so it’s worth experimenting: up close acoustic guitars are way too boomy for my taste, although the low frequency cut in the software preamp can get rid of unwanted rumble. It’s classic microphone proximity effect: the closer you are, the more bassy things get.

It’s very sensitive, so you will need a noise gate – Garageband has one in software – to get rid of unwanted noise. In my case it picked up planes going past, dogs barking in the street… which is actually a pretty good thing for podcasters, because it means you can stick the mic in the middle of a table and record group discussions. If like me you tend to tap your foot and generally fiddle around when the microphone is live, you’ll really, really appreciate the shock mount, which stops that stuff reaching the mic.

Signal noise doesn’t seem to be a problem. The Samson has an internal preamp, and the trick seems to be to use the SoftPre software to whack the gain up and then keep the volume low in your recording software. Do it the other way round (low gain in SoftPre and high gain in Garageband) and the results will be hissier than a big box o’snakes.

I paid my own cash money for this, and I’m pleased I did: it’s exactly what I want from a mic without costing too much money. But if you fancy one, shop around – the price differences out there are dramatic.