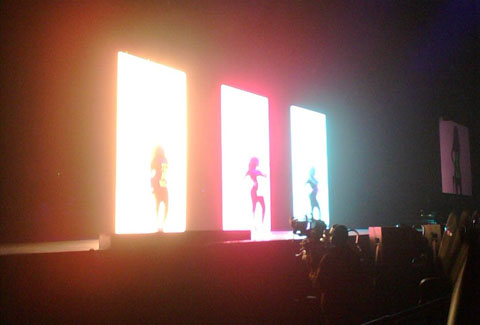 Here’s a wee mental experiment for you: think of the main riff from Saturday Night Fever. It’s a fantastic, swaggering, loping thing, isn’t it? Now, slow it down in your head. Not much – just a little bit. Hear how it drags?

Okay. Take it back up again and the swagger should be restored. Now, speed it up – again, not much, just a little bit. It doesn’t work, does it?

Tempo is crucial to (some) music. Slow a superb dance track down by a couple of beats per minute and it loses its thrust; take a sad song, speed it up slightly and it becomes as emotional as karaoke. It’s something that used to do my head in when I played in a band, because occasionally we’d do a song just a little bit too slow and if we didn’t stop and start again, it’d be like wading through mud. Horrible, horrible, horrible.

There’s a point to this, honest. I went to see Sugababes last night and while they were in fine voice and their backing band wasn’t too annoyingly muso, their best stuff didn’t quite work. The fast songs were a little too slow – so Red Dress dragged when it should strut – and the slow songs were a little too fast, so Too Lost In You felt hurried rather than harried. And then to make things worse they did Easy – easily my favourite Sugababes song – and let the backing band bludgeon it to death, before inserting an ill-advised blast of Nelly Furtado’s Maneater mid-song. Gaaaaaah.

I’d still rather see Sugababes live than 99% of rock bands, mind you.