I’ve been looking for a digital photo frame for a while, but I’ve been put off by the way they look: in most cases, they appear as if someone’s stuck a PlayStation 2 to the back of a cheap and nasty picture frame, and the SD card slots are usually placed in such a way that the card sticks out noticeably.

This, though, is brilliant. It’s the Neovo FotoVivo V10, a 7-inch photo frame that doesn’t attempt to mimic traditional frames. It’s big enough to see but not so big that it takes over your house. 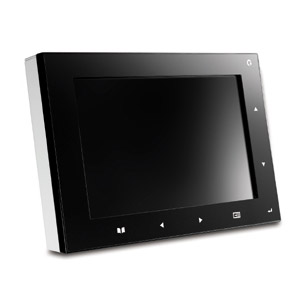 I love the design. Those glowing white buttons are usually invisible, and only appear when you touch them. The TFT is roughly the size of a traditional 4 x 6 print and the 800 x 480 display is pin sharp. It can handle memory cards I’d forgotten even existed, and the card slots are in a sensible place (on top) and hidden away under a concealed flap. Some nifty ideas include programmed on/off times and the ability to keep the image static or change it every few seconds, minutes, hours or every day. You can also transfer photos to the 128MB of internal RAM via the supplied USB cable.

The photo is misleading: the bezel looks a lot smaller in the plastic than it does in the pic.

Of course, nothing’s perfect and there are a few niggles with this too. At Â£128 (via Udiggit.com, which was Â£10 cheaper than the usual suspects) it ain’t cheap, and you’ll need to put it near a power socket – the cable’s very short and there’s an annoying cylinder right at the connector end, which will be visible if you put it on a mantelpiece.

If you’re going to use memory cards you’ll also need to delete not just unwanted files, but hidden ones too: if your card contains an invisible folder such as an OS X .trashes folder, the V10 will try and display that too. And while 800 x 480 is much better resolution than most picture frames I’ve looked at, it’s still a weird aspect ratio and you’ll need to crop your pics for best results.