The sweet smell of hypocrisy

This is the cover of this week’s Now magazine: 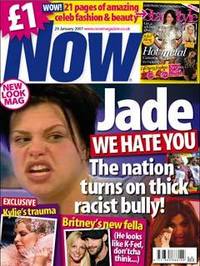 It’s pretty appalling, but the worst bit is the editor’s letter. As it explains, Now employed Jade Goody as a columnist until November of last year, and her contract is well and truly terminated. The implication is that Now has sacked her because of her Big Brother performance, presumably by using a time machine, and the ed’s letter basically says “we employed her but we didn’t realise that she’s more evil than Hitler. Burn the witch!”

There’s a sad irony here:Â  Now’s appalled at what it sees as Goody’s bullying behaviour, so it’s decided to, er, bully her. Given that Jade isn’t the sharpest tool in the box and is hardly the most secure person in the world, this kind of vilification might have a very unhappy ending.